Laura Gibbs · 129. Zeus and the Wedding Gifts
Zeus, King of the Gods, was celebrating his marriage to Hera, the Queen of Heaven.
He invited all the animals to attend the festivities, and he expected that all the animals would bring wedding gifts according to their abilities.
The bee brought a gift of honey, for example, and the cow brought milk. The monkey performed a dance, the nightingale sang a song, and so on.
Then the snake arrived, carrying a rose in its mouth.
Zeus, however, refused the snake's gift.
"There's nothing but poison that comes from your mouth," Zeus said, "even if it looks like a rose."
Inspired by: Mille Fabulae et Una, a collection of Latin fables that I've edited, free to read online. I am not translating the Latin here; instead, I am just telling a 100-word version of the fable.
Notes: This is fable 773 in the book, which is Perry 221. I added the details about the gifts from the other animals. 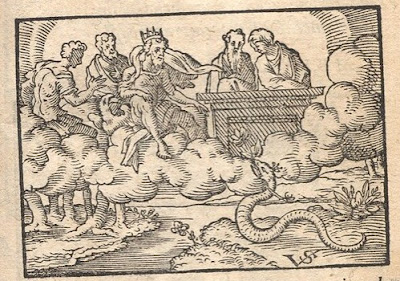