Laura Gibbs · 67. The Rabbit's Resolution
The animals were holding an assembly.
All the animals had complaints they wanted to make, and the assembly dragged on and on until the rabbit proposed a resolution.
"It's time to declare equality among the animals. Instead of this animal complaining about that animal, one against another, every animal should be treated with the same respect and dignity as every other animal," shouted the rabbit, "regardless of how powerful they are. Equal rights for all!"
The lion, however, opposed the rabbit's resolution.
"Let the rabbit shout all he wants," growled the lion. "His words have no claws and no teeth."
Inspired by: Mille Fabulae et Una, a collection of Latin fables that I've edited, free to read online. I am not translating the Latin here; instead, I am just telling a 100-word version of the fable.
Notes: This is fable 166 in the book, which is Perry 450. 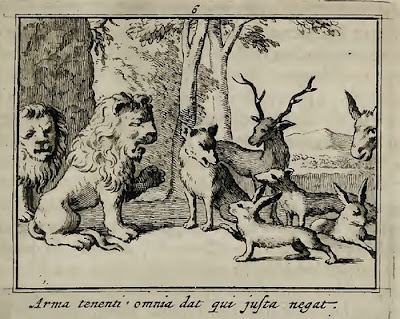