Laura Gibbs · 190. The Priest and the Weeping Woman
As a priest sang the Alleluia, an old woman sitting in the front pew burst into tears. The louder the priest sang, the louder she wept.
He thought to himself, "I had no idea that I could move someone to such devotion with the sound of my voice!"
After the Mass, he spoke to the woman. "I saw that you were deeply moved by today's service," he said.
"Yes, thank you, Father," the woman replied. "Only yesterday, a wolf killed my donkey, and you sounded just like my poor donkey. When I heard you singing, it moved me to tears."

Inspired by: Mille Fabulae et Una, a collection of Latin fables that I've edited, free to read online. I am not translating the Latin here; instead, I am just telling a 100-word version of the fable.
Notes: This is fable 866 in the book, which is not in Perry's catalog; it is a fable that came to Europe via Middle Eastern folktale traditions. Compare the story of Nasruddin's goat: Nasruddin's Tears of Sorrow. 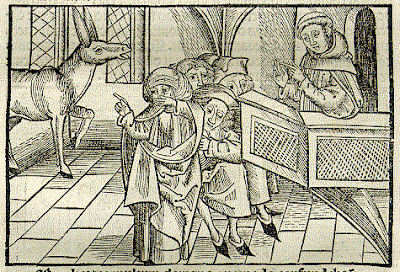