Laura Gibbs · 159. The Milkmaid's Bucket of Milk
A woman was carrying a bucket of milk to market, balancing the bucket on her head.
"I'll sell the milk," she thought, "and buy some eggs to hatch. I'll raise the chicks, who will lay more eggs, which I'll sell to buy a piglet. I'll raise the pig till he's big and fat; then I'll sell him and buy a colt. I'll raise the colt, and when he grows up, I won't walk anymore. I'll go riding instead: giddy-up, giddy-up!"
But when she began to gallop like a horse, she spilled the milk and ended up with nothing at all.
Inspired by: Mille Fabulae et Una, a collection of Latin fables that I've edited, free to read online. I am not translating the Latin here; instead, I am just telling a 100-word version of the fable.
Notes: This is fable 859 in the book, which is not in Perry's catalog, although it later enters the European tradition. In some versions, the woman imagines buying a dress and going dancing, and that's when she spills the milk. There are many ways to tell the story! See Ashliman's collection of Air Castle stories. 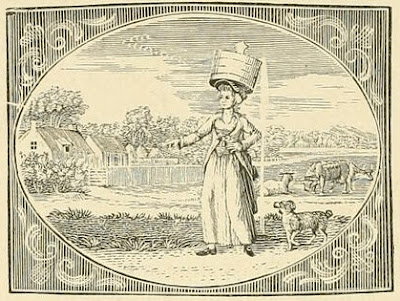