The Lion in the Dream

A rich man dreamed that a lion killed his only son. Terrified, he built a splendid palace and locked his son inside to keep him safe.
To entertain the boy, there were animals painted on all the walls; one painting showed a lion.
The boy began to hate that lion.
"It's your fault I'm locked up here!" he shouted. "All because of a lion in my father's dream."
The boy then struck the painting with his fist. The blow knocked loose a ceiling tile which fell on the boy's head and killed him.
Thus the dream came true after all.


Inspired by: Mille Fabulae et Una, a collection of Latin fables that I've edited, free to read online. I am not translating the Latin here; instead, I am just telling a 100-word version of the fable.
Notes: This is fable 933 in the book, which is Perry 363. In the original story the boy wounds his hand as he hits the wall and the wound becomes infected; I opted for a quicker death instead. 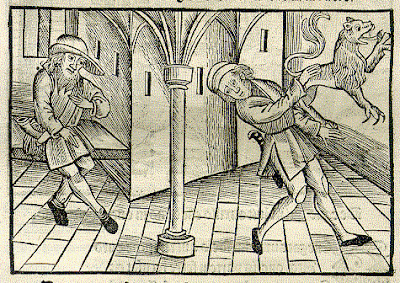