Laura Gibbs · 176. The Hypnotized Sheep
A shepherd had many sheep.
He couldn't control the herd by himself, so he decided to hypnotize them.
To some he said, "You're a lion! Don't be afraid." To others he said, "You're a tiger! No need to run away."
The hypnosis worked. The sheep really thought they were lions or tigers.
He even made some of the sheep think they were human beings, shepherds like himself.
Then, when he butchered some sheep, the others looked on and thought, "Well, he's only butchering the sheep. I'm a lion! I'm not afraid!"
One by one, the shepherd butchered all the sheep.

Inspired by: The Little Book of Sufi Parables by Nico Neruda
Notes: This is story 21 in the book. This is a story from George Gurdjieff, whom you can read about at Wikipedia. 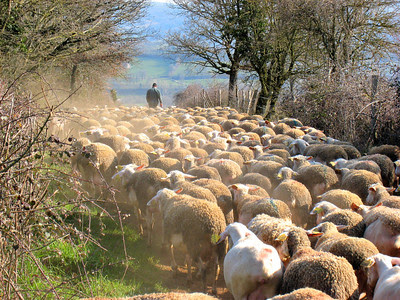