Laura Gibbs · 4. The Lion and the Bulls
A lion wanted to attack two bulls, thinking they would make a very fine feast.
The two bulls joined forces, however, and turned their horns towards the lion, so he could not get between them. Combining forces, those bulls were stronger than the lion.
Since the lion couldn't fight both bulls at once, he resorted to subterfuge instead.
"If you betray your partner to me, I promise not to touch you!" he said to each one, separately. "I'll kill the other one; I won't kill you."
Using this trick, the lion managed to kill both bulls easily, one by one.
Inspired by: Mille Fabulae et Una, a collection of Latin fables that I've edited, free to read online. I am not translating the Latin here; instead, I am just telling a 100-word version of the fable.
Notes: This is fable 4 in the book, which is Perry 372. Sometimes this fable is told about a lion and four bulls, one in each corner of a field. 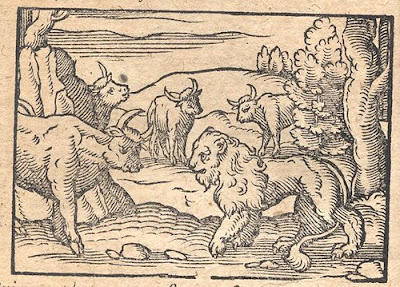