Laura Gibbs · 56. The Friendly Wolf
A man once owned twelve sheep. He wanted to take a trip, so he entrusted his sheep to a friendly wolf.
"I'll be glad to watch them," said the wolf.
On the first day, the wolf ate one sheep, another the next day, and by the time the man returned, there were only three sheep left.
"What happened to the rest of my sheep?" the man asked.
"They died unexpectedly," said the wolf.
"Show me their skins," said the man, and there he saw the wolf's teeth-marks.
"You are a murderer!" shouted the man, and he had the wolf hanged.

Inspired by: Mille Fabulae et Una, a collection of Latin fables that I've edited, free to read online. I am not translating the Latin here; instead, I am just telling a 100-word version of the fable.
Notes: This is fable 81 in the book, which is a fable from Odo of Cheriton. In Odo's Latin, the man calls the wolf his compater, Spanish "compadre." 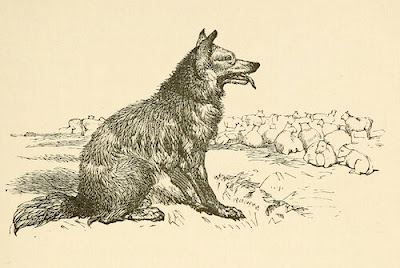