For the #RamadanReadathon at Twitter, I want to highlight some story collections that people might enjoy reading, featuring free full-text books online; here are all the books I've featured so far, including a 100-word story for each one too.

So, today's book is Historical Tales and Anecdotes of the Time of the Early Khalifahs by Muhammad Diyaab Itlidi, translated by Alice Frere (Mrs. Godfrey Clerk). See details below, and here is a story from that collection:

The Arabs captured the Parthian nobleman Hormuzan.
"Convert to Islam!" commanded Caliph Umar, threatening him with a sword.
When Hormuzan refused, Umar said, "Kill him!"
"Let me have a drink of water first," said Hormuzan. "Let me live till I drink."
Umar agreed and gave Hormuzan a goblet of water, which Hormuzan cast aside.
Bound by his promise, Umar didn't know what to do, so he lowered his sword.
Hormuzan then said, "There is no God but Allah, and Mohammed is his prophet." He then added, "I didn't want anyone to say I professed Islam in fear of the sword."


You can find a longer version of that story, and many other stories besides, in the online book, which is available at Hathi Trust and Google Books. 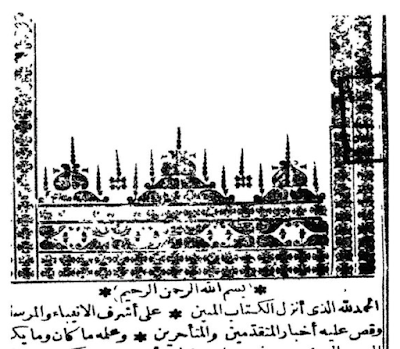