Laura Gibbs · 49. The Wolf and the Porcupine
A wolf came across a porcupine. He was a fierce-looking creature armed with darts, so the wolf kept his distance.
At the same time, the wolf was quite hungry, and the porcupine would make a very fine snack if only he would lay aside his darts.
"Dear porcupine," said the wolf, "don't you know that we animals are living at peace? It is bad manners for you to be going around armed, as if there were war between us."
The porcupine bristled. "I'm no fool," he replied. "When I see a wolf nearby, I am at war, not at peace."
Inspired by: Fables of Aesop and Other Eminent Mythologists by Roger L'Estrange, 320.
Notes: This fable is not part of the classical Aesop tradition, but compare the story of the fox who preached peace. 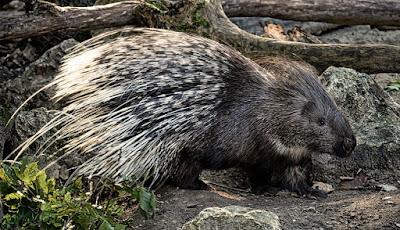