Laura Gibbs · 176. The Three Travelers
There were three travelers whose food was almost gone, so they decided the one who had the best dream would eat the remaining food for breakfast.
When they awoke, the first man said, "Zeus's eagle carried me up to Mount Olympus!"
The second said, "I dreamed I plunged through the ground down into Hades."
The third traveler then said, "I dreamed I saw you being taken up to heaven" - he nodded to the first - "and I saw you plunge into the underworld" - he nodded to the second. "Since you had both vanished forever, I decided to eat the food myself."
Inspired by: Fables of Aesop and Other Eminent Mythologists by Roger L'Estrange, 481.
Notes: This fable is not part of the classical Aesop tradition; find out more here. The same story is told about Nasruddin.

Here is an illustration from Steinhowel's Aesop: 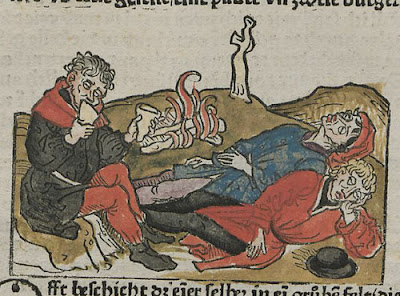