Laura Gibbs · 151. The Bedouin's Pitcher of Water
A poor Bedouin woman urged her husband to take the king a gift so that they might receive a gift in return.
"But we have no gift to give," he protested.
"Take the king a pitcher of water," she replied. "Water is precious in the desert, and desert water is rare."
So the husband took a pitcher of water to the royal city. With great care, he made the long journey, not spilling a drop.
The king accepted the water kindly and, in his generosity, he returned the pitcher to the Bedouin, but now the pitcher was filled with gold.

Inspired by: The English prose version of Rumi in Tales from the Masnavi by A. J. Arberry, 8. In his notes to Rumi's long version of the story, Arberry also provides a detailed summary of a long and even more comical version in Muhammad Aufi's Jawami al-hikayat.
Notes: Compare the legend of Krishna and Sudama. You can read more about the Bedouin at Wikipedia. 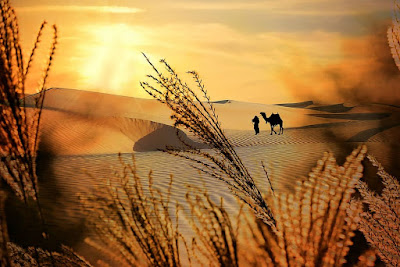