Brer Rabbit and the Tar-baby

"I'm gonna get that rabbit," Brer Fox thought to himself. "I need me a tar-baby!" So he made a pretty doll from tar and stood her by the road.
Brer Rabbit came by and saw her. "Morning!" he said.
Tar-baby said nothing.
"I said MORNING!"
Nothing.
"Are you deaf? Answer me, girl!"
Nothing.
"You sure are stuck-up!" he shouted, and he hit her on the head. His hand stuck. Then his other hand. Stuck.
Right foot. Left foot. Even his head. Stuck.
Brer Fox leaped out from the bushes, laughing. "You're the one stuck-up now, Brer Rabbit, you sure are!"

Inspired by: Uncle Remus: His Songs and Sayings by Joel Chandler Harris.
Notes: The tar-baby story is a widespread African African-American folktale type. The tar-baby is gendered as "she" in Harris's story, and in other versions of the story that quality comes through even more clearly, so I relied on that in my story too, saying she was pretty. For Harris, this story follows up on how Brer Rabbit made Fox angry by escaping from the dinner (Brer Rabbit Invited to Dinner), but in most story sequences the tar-baby happens as a result of the trickster muddying the common water source. This is one of the Brer Rabbit stories that does have an ATU Tale Type number: 175. The Tar-Baby and the Rabbit.

Illustration by A. B. Frost: 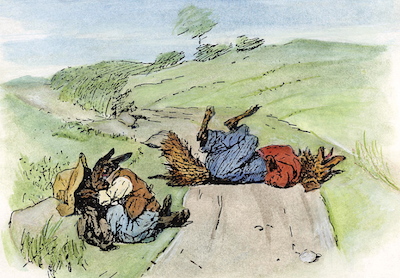 A drabble is a story told in 100 words, or fewer. I'll be collecting drabbles here inspired by folktales from around the world. Find out more about this project here: A GUIDE TO THE MICROFABLES.

This work is licensed under a Creative Commons Attribution-NonCommercial-ShareAlike 4.0 International License.