The Hunter and the Lion

A hunter and his child found Lion caught inside the hunter's trap. "Let me out!" begged Lion. "I won't hurt you! I promise! I'll reward you!"
Cautiously, the man opened the trap. Lion leaped out, grabbed the child, and ate it. "Now I'll eat you!" he roared.
The man ran, and Lion followed. They found themselves in Rabbit's garden.
"Stop!" said Rabbit. "What's going on?"
The man and lion both started shouting, but Rabbit said, "Don't tell me; show me!"
They went back to the trap and Lion got inside.
"This time," Rabbit told the man, "don't let him out!"
Inspired by: "The Tiger and the Trap" in Folklore of the Banyanja (published in Folklore) by Madeleine Holland, 1916.
Notes: You can read the original story online. The original has a "tiger," so I'm not sure what African cat is intended; there is the "panthera leo" type of lion in Zimbabwe, so I went with lion. 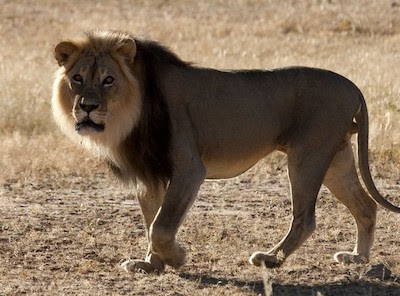