The Pangolin and His Daughter

"Whoever is the best at keeping time will marry my daughter!" said Pangolin. He wanted his son-in-law to wake him up to go foraging, and then alert him before the dawn.
Many creatures tried and failed Pangolin's test.
Then Francolin dclared, "I will marry Pangolin's daughter!"
At twilight he flew into a tree and began singing, which woke up Pangolin. Pangolin found the black ants that he likes best and ate and ate and ate.
Then, shortly before dawn, Francolin began singing again, so Pangolin came home, getting into bed just as the sun rose.
So Francolin married Pangolin's daughter.
Inspired by: "How Okpwa Francolin Obtained Pangolin's Daughter in Marriage" in Bulu Folk-Tales (in Journal of American Folklore) by George Schwab, 1914. The Bulu are a people who live in Cameroon.
Notes: You can read the original story online. The name of the francolin in the story is okpwa. The author notes: "the large francolin (Francolinus squamatus) calls loudly from low trees just about dusk in the evening, and again at about 4.45 in the morning, thus serving travellers as a sort of alarm-clock." 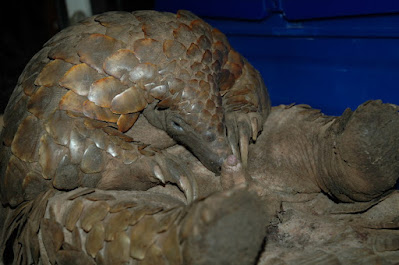