The Wolf and the Sheepdogs

A shepherd found a wolf-cub and raised it with his own dogs.
When the wolf grew up, he joined the dogs in chasing any wolf who dared steal a sheep from the flock.
Sometimes, however, the dogs weren't strong enough to keep up the pace. Leaving the dogs behind, the two wolves would feast together on the stolen sheep.
The shepherd's wolf got so used to eating sheep that he would occasionally steal a sheep from the flock, and even share the sheep with the dogs.
The shepherd finally realized what was happening and hanged the wolf from a tree.
Inspired by: Mille Fabulae et Una, a collection of Latin fables that I've edited, free to read online. I am not translating the Latin here; instead, I am just telling a 100-word version of the fable.
Notes: This is fable 78. Lupus cum Canibus Nutritus in the book, which is Perry 267. 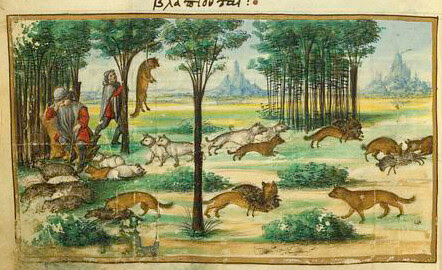