The Fox, the Wolf, and the Cheese

A fox saw the moon's reflection in a well and thought it was cheese.
This well had two buckets: when one went down, the came up. The fox hopped in the bucket and rode down, only to discover there was no cheese.
She was trapped!
Finally she saw a wolf peering down at her. "What are you doing down there?" he asked.
"I found a wheel of cheese," she replied. "I've eaten all I want; hop in the bucket and come eat the rest!"
The wolf rode the bucket down, sending the fox up, and then she ran off, laughing.
Inspired by: Mille Fabulae et Una, a collection of Latin fables that I've edited, free to read online. I am not translating the Latin here; instead, I am just telling a 100-word version of the fable.
Notes: This is fable 70. Vulpes, Lupus, et Caseus in the book, which is from Desbillons (and it also appears in La Fontaine 11.6). In the original story, the fox is in the well so long that the moon is no longer full, so the fox tells the wolf that she's gnawed on that side, leaving the rest for the wolf. 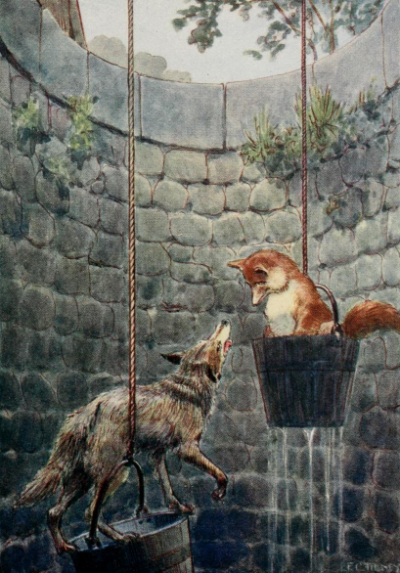